Just like in every educational system, you need to learn the basic theory of a subject before moving into more advanced concepts, and jiu-jitsu is no different. Scranton MMA’s Beginner Brazillian Jiu-Jitsu program specializes in teaching the very foundational techniques of jiu-jitsu that can be applied in a variety of different scenarios, everything from a street self-defense situation to a competitive grappling tournament to an MMA fight.

Our Beginner Jiu-Jitsu class is based upon a rotational curriculum, which features a dynamic, deliberate, and precise technique drilling specifically designed to help accelerate our students’ learning while still allowing them to work and learn at their own pace. And best of all, because of the rotational aspect of our curriculum, lessons can be completed in any order, meaning there is NEVER a wrong time to come in and take your first class because you never truly “miss” a lesson!

What is Brazilian Jiu-Jitsu?

Brazilian Jiu-Jitsu (BJJ) is a martial art based on grappling techniques. The goal is to gain skill in controlling and resisting your opponent to force them into submission. As opposed to other mixed martial arts which involve standing techniques, much of the time spent on the mat is on the ground. By taking the opponent onto the ground, you can find dominant control positions.

The overarching goal is to learn and overcome size, strength, and aggression differences by leveraging grip and position. This allows students to gain an unmatched understanding of the limits and abilities of their own bodies. The path to learning BJJ is both a physical and mental one, as students overcome mental barriers and learn the power of persistence and dedication.

Brazillian Jiu-Jitsu was founded around 1920 by Brazillian brothers named Carlos, Oswaldo, Gastão Jr., George, and Hélio Gracie. Carlos was taught traditional Kodokan judo by his instructor, and they later went on to develop their own self-defense coined “Gracie Jiu-Jitsu.”

As time went on, an adaptation of Gracie Jiu-Jitsu and Judo created Brazillian Jiu-Jitsu, which is now one of the most fundamental aspects of mixed martial arts (MMA).

BJJ focuses on the fact that a smaller, weaker person can defend themselves against someone much bigger using leverage and weight distribution by taking the fight to the ground using different holds and submissions for defense.

The art of BJJ is accompanied by a ranking system, in which different color belts are awarded after techniques are mastered and time is spent dedicated to the combat sport.

Each beginner receives a white belt, followed by blue, purple, brown, black, coral, and red. Black denotes a level of BJJ mastery in both technical and practical skills. 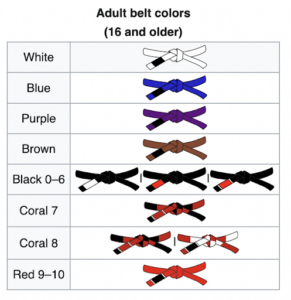 While BJJ aims to force opponents into submission by getting them on the ground and applying techniques like chokes, strangles, and joint locks, Japanese Jiu-Jitsu (JJJ) focuses on throwing opponents, joint manipulation, striking, blocking, and some chokes & strangulations. BJJ tactics come from a sports perspective, while JJJ is more focused on self-defense and traditionally, for the un-armed samurai.

Scranton MMA, located in Dunmore, PA near Scranton, offers BJJ classes for students at every level looking to dedicate themselves to their physical and mental wellbeing. Fill out our contact form to try out our gym and get your first class for free!